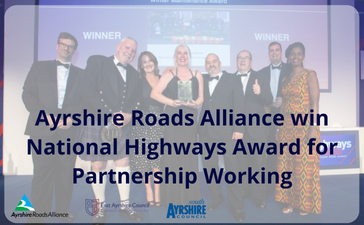 The Ayrshire Roads Alliance has won an award for partnership working at the Highways Awards.

The Highways Awards are extremely competitive, with 500 key industry professionals across the UK taking part.

Commenting on the award, Kevin Braidwood, Head of Ayrshire Roads Alliance said: “This award for partnership working demonstrates the continued hard work and dedicated community spirit of our Winter Resilience Groups, who deserve to be recognised nationally for all they do for their communities.”

The Alliance currently has over 130 winter resilience groups spread throughout East and South Ayrshire with the number rising each year. Each year the groups participate in our winter resilience programme voluntarily carrying out footway gritting within their local communities, helping vulnerable neighbours access their homes and local shops.

The winners of the Highways Awards were announced in a special ceremony on Thursday 21 October 2021.