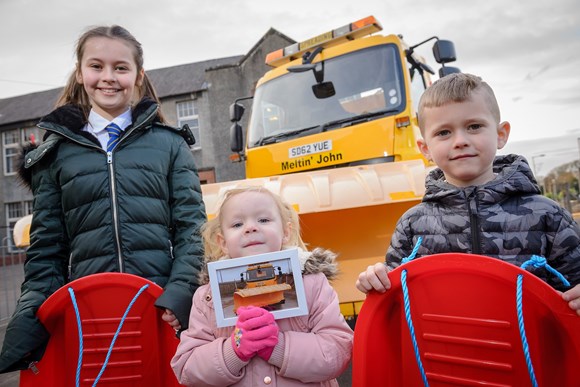 Pupils from schools across East Ayrshire looked to the stars for inspiration when they helped to name the Ayrshire Roads Alliance’s gritters.

The Alliance recently launched a new online feature called, Track my Gritter, which allows residents to track gritters operating in their area between 16:00 and 08:00, during the winter months.

For a bit of fun, local pupils were asked to name each gritter featured on the map and they did not disappoint. Hundreds of hilarious names were submitted, many with pop music themed names, like Meltin’ John, Spready Mercury, Gritney Spears and Arianna Gritty.

Councillor Jim Roberts, Cabinet Member for Economy and Infrastructure said: “The children came up with some amazing names that really made us laugh. The gritters have been named virtually, on the Track my Gritter map and, just for the children, have had their name printed on the front of each vehicle.”

Sydney Mullen (P7) and Harry Mullen (P2/3) were incredibly excited to welcome their specially named gritter, Meltin’ John to Netherthird Primary. They received a sledge as a small prize for coming up with such a brilliant name along with Alex Rutherford from the Early Childhood Centre whose suggestion Spready Mercury was also selected.

In the coming weeks, the gritters will be visiting each of the primary schools and Early Childhood Centres that have helped to give them their special names.

Councillor Roberts, who was joined at Netherthird Primary by Councillor Fiona Campbell, Cabinet Member for Skills and Learning, added: “Our pupils have been really excited and enthusiastic about helping to name the gritters and they can’t wait to welcome their own gritter to their school before the Christmas break.

“All fun aside, Track my Gritter is a great resource for our residents. During the winter months, our gritters can be out in all weathers, with teams from the Alliance providing an excellent service to our local communities day and night. For the first time, you can now follow the gritters operating in your area from 16:00 until 08:00 the next morning.

“The system, which is available on the Ayrshire Roads Alliance website, will provide a bit of reassurance to communities and also give an insight into the extensive gritting service provided by the Alliance during the winter months.” 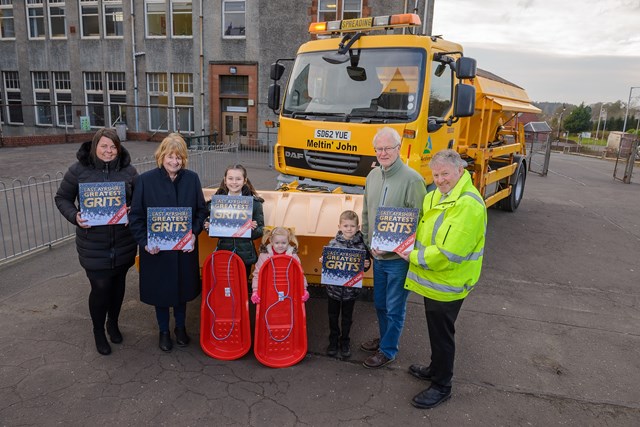 The Ayrshire Roads Alliance is not responsible for Trunk Roads. Scotland TranServ is responsible for all trunk road maintenance, including the winter service on the A76, A77 (from south of Fenwick) and A78 trunk roads in East and South Ayrshire.

Connect Roads is responsible for carrying out the winter service on the M77 in East Ayrshire.