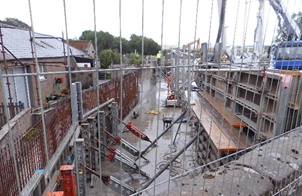 In December 2013 the New Cumnock area experienced a period of severe rainfall which resulted in  widespread flooding when the Nith, Afton and Connel rivers burst their banks.

This has resulted in a two phase approach being developed with Phase 1 – Leggate currently under construction by Barhale Construction plc on a tender of £760,962.86

Phase 2 Afton is at detailed design stage and will be brought forward in the near future.

The Phase 1 Leggate works which are being funded by East Ayrshire Council and the Scottish Government essentially comprise water retaining flood embankments and associated overspill structure and reinforced concrete walls. The works are progressing well with the South Boig Farm Field works and embankment complete.

The field works included lowering of the field level to facilitate flood water passage and grass seeding was carried out by Mr Smith the farmer. All concrete channel works including the placing of support beams are now complete.

Additional works were carried out to install a High Strength Screed to the floors of the existing culverts. Earth reinforcement works and rock armour protection to the right hand bank of the river are on going. Knockshinnoch site clearance and bulk excavation works  have commenced  with excavation and realignment works on the left hand bank of the river.