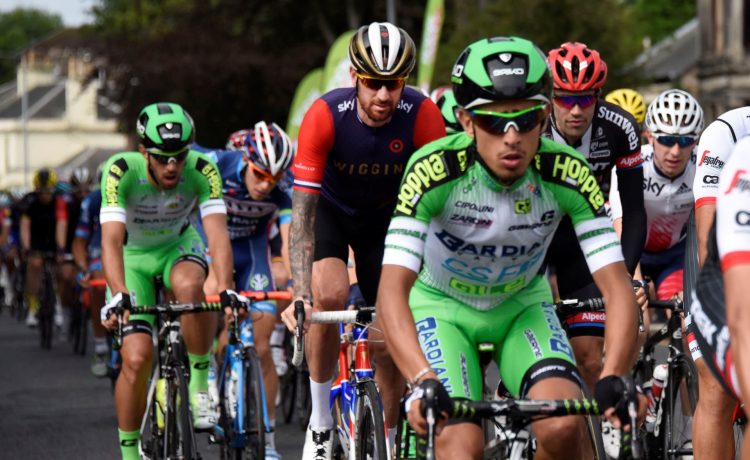 The OVO Energy Tour of Britain will return to East and South Ayrshire this September.

Stage One of the Tour will start in George Square, Glasgow on Saturday 7 September and will see some of the world’s top cyclists competing on over 200 km of road finishing the first day’s racing in Kirkcudbright.

East Ayrshire will welcome the first of the riders just after 11:00 at Kings Ford, Stewarton before they race on through Kilmaurs, Kilmarnock and Crookedholm leaving East Ayrshire after Galston.

The race will head to Tarbolton, Mossblown and Coylton before heading back into East Ayrshire at Dalrymple. The last stretch in Ayrshire will run from Straiton and will leave Dalmellington at approximately 13:20.

Ayrshire’s countryside lends itself perfectly to competitive racing. The first intermediate sprint will take place in East Ayrshire on London Road, Kilmarnock, KA3 7BU at 11:40. There will also be two King of the Mountain climbs. The first climb will be on the B741 Dalmellington Road at approximately 12:55 and the second climb will be on the A713 at Carsphairn Road at approximately 13:10.

Councillor Elena Whitham, Depute Leader and Cabinet Member for Housing and Communities said: “The Tour of Britain will be returning to Ayrshire this September as East and South Ayrshire host part of the first stage that runs from Glasgow to Kirkcudbright. Top racing teams will be taking to our streets, some of the best sprinters in the world will be flying up London Road in Kilmarnock and the King of the Mountain climbs will give riders the opportunity to split the race or take control of the peloton.

“It is going to be a really exciting race and a great opportunity for our communities to get out and cheer on some of the best riders in the world. Tour of Britain organisers will be in touch with local residents along the route prior to the race with details and timings of the road closures.

“There will be community events held within East Ayrshire encouraging our residents to participate in cycling helping to ensure that Ayrshire remains at the heart of the cycling community for years to come.”